Login / Registration
Home Articles How to choose your hot tub Mspa from our website?

How to choose your hot tub Mspa from our website? 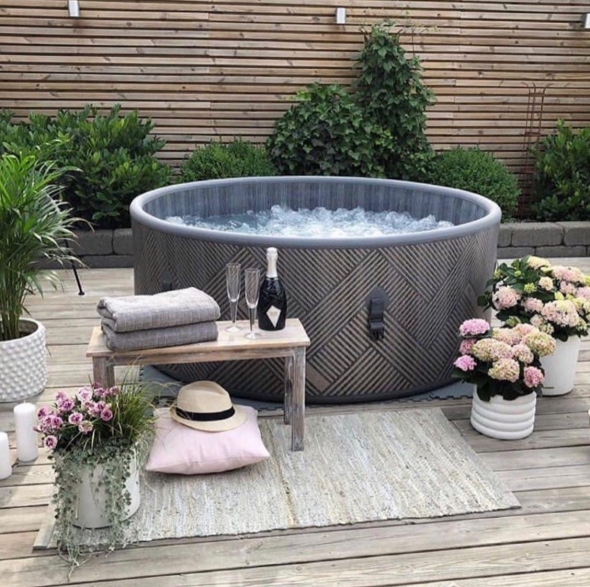 The inflatable hot tub can turn any home into a spa – oasis, a place where you can forget about everyday stress. With each passing year, owning a hot tub becomes easier for a large number of people to achieve.

Do you like hot water? Do you long for an energetic massage or do you just want to relax and rest whenever you want? The inflatable hot tub will provide you with this opportunity. The inflatable spa creates a pleasant mood and atmosphere, it is able to reduce stress and activate blood circulation, even to relieve muscle injuries. In short, the inflatable spa is a healing balm for our body and spirit.

In your own home you decide when and with whom to enjoy the pleasure of the spa.

First, you need to be clear about where to position it - outside or inside the room.

Indoor installation has many advantages, such as the fact that you do not need to go out in the winter to use it and it is protected from adverse weather conditions. On the other hand, you need to consider the weight of the inflatable hot tub, full of water, whether the foundation on which is placed will withstand its weight. It is also good to provide an adequate ventilation or dehumidifier to prevent damage to the structure of the room as a result of high humidity. A good alternative would be a compact hot tub for one or two people, from which the water is drained after use.

For the installation of an outdoor spa, also known as a garden spa, a flat, solid area in the garden or on the porch is required. Using an outdoor hot tub will reward you with wonderful experiences. Тhe enjoyment of the night sky and quiet nature is unmatched. The presence of a good thermal cover is a condition to keep the heat of the water in the inflatable spa for a longer time. The cover protects the water from contamination so it can be changed less often.

How to choose an inflatable spa from our website?

In order to help you choosing the right spa for you, here we will explain the different specifications of each Mspa model.

Common to all models is the antibacterial and non-slip inner surface of the spa. Also, the power of the filter pump is 1800 l / h for all models.

The most inexpensive models, which are Tekapo and Ottoman, are from the "Comfort" series. The spa models of this series have the main functions for an inflatable hot tub, namely air massage, heater, filter pump and cartridge filter, cover. The built-in UV system, which neutralizes bacteria and microorganisms, helps to disinfect the water. As with most spa models from the other Mspa series, the control box is factory-built into the wall of the spa.

How do inflatable hot tubs from the "Comfort" series differ from the other series?

The inflatable hot tubs from the "Urban" series represent the transition from middle to high class. The spa models of this series have the latest Mspa technological innovations, such as auto-inflation, which protects the spa from bursting due to overinflation.

The built-in "smart" heater decides based on the water flow whether to heat at full power or just to keep the water warm.

On our website you can find an Aurora inflatable spa from the "Urban" series.

Extras that the inflatable portable hot tubs from the "Urban" series have:

In addition, the Aurora inflatable spa has an LED strip with a combination of several colors.

The Premium series is characterized by the presence of some of the most functional extras for an inflatable hot tubs. The Exotic and Camaro models are from this series, which you can find on our website.

They are distinguished by their external design. The Exotic spa, for example, imitates crocodile leather.

In this series, too, the control box is factory-built into the wall of the spa and can be very easily removed in case some part needs to be replaced.

Inflation is done by pressing one button.

The inflatable hot tubs from the “Premium” series have the following extras:

The inflatable hot tubs from the "Muse" series are of the highest class. Only they can offer efficient hydromassage thanks to the 6 hydromassage nozzles built into the wall of the spa.

The spa models from the "Muse" series have all the latest Mspa technological innovations, such as Auto-inflation, Powerful "smart" heater 2200 W, a combination of Ozone generator and UV-system for water disinfection, Inflatable thermal cover and Isolation pad.

Carlton inflatable spa is a representative of the "Muse" series.

The spa models from the "Frame" series, as the name suggests, are the hardest inflatable hot tubs. Their construction is radically different from that of other inflatable models. The spa models of the “Frame” series are inflated with a pump, which is factory-delivered together with the hot tub, up to 12 - 15 bar, as the walls of the hot tub become extremely hard and can withstand a sitting person without giving in.

Only the spa models of the "Frame" series have a control box, which is installed externally next to the spa.

We offer the Mono Concept and Naval models from this series.

Due to their sturdiness, the hot tubs from the "Frame" series belong to the high class.

They have the following more important extras: